Infrastructure works in every direction:

With the archeological excavations nearing their final phase, infrastructure works progressed in the last quarter of the year into virtually every area of the BCD, including the Foch-Allenby, Nejmeh, Debbas, and Saifi areas.

Work on tunnels and underpasses also spread to the entire traditional heart of the city with extensive construction evident on the underpass extending from Fouad Chehab Avenue to Fakherddine Street,and on the ones serving George Haddad Street and the Riad Al Solh area.

To ensure that the city center remained accessible and that services and utilities remained uninterrupted, SOLIDERE routinely established detours and rerouted power,phone and telecommunications cables.

SOLIDERE is using metallic structure to reroute operating phone and power cables, so that city services are not interrupted by ongoing infrastructure works.The raised metallic ducts protect cables against wind, rain, or storms, or accidental severing by operating machinery.

Carried out in collaboration with Lebanon's Electicity Company and the Ministry of Post and Telecommunications,the rerouting has affected the areas within and outside the BCD,including Hamra, Kantari and Ras Beirut. Following SOLIDERE'S lead,other companies are utilizing the same method in other parts of the city.

A Paribas Capital Markets study published on September 25 1995 evaluated the fair value of SOLIDERE shares at about 30 percent higher than the then current trading value of $121.Paribas analysts used both a discounted cash flow model and a residual value model to assess the fair value of company shares, placing it at between $159 and $165.

The residual value model is the most common valuation method used to appraise land worth prior to development.On this method,shares are evaluated on estimates of what shareholders would receive if all company assets were sold and proceeds distributed.

The discounted cash flow model looks at the company on the long term. In the case of SOLIDERE, it assumes that the company will operate for 25 years and will, in conjunction with others,develop the property it owns.

Utilizing this latter method, Lebanon Invest's October 1995 analysis of  SOLIDERE shares places their value at 25 percent higher than the $123-124 trading value at that date.

On November 13 1995 the Beirut Secondary Market started operating on the basis of two fixings a day. The change from the previous single fixing means  that trade in SOLIDERE shares takes place twice daily,providing buyers and sellers more discretion in their operations.

The first Vice Governor of the Central Bank Nasser Saidi, who heads the committee overseeing the market, said the change will allow for more dynamic trading in keeping with practices in the international money markets.

Secondary Market share, trade and volume during the last quarter :

SOLIDERE share prices moved up during the latter part of October, reaching the $130 mark. During the last two months of the year, both A and B shares hovered at around $120.

As mentionned above, a new system based on two fixings a day was launched starting November 13,allowing for greater flexbility for traders.

SOLIDERE issued its semi-annual balance sheet this quarter showing company expenditures and profits for the first half of 1995.

Published in a number of local and international newspapers, the report was detailed to representatives from banks and financial institutions during a series of meetings held at the Riviera Hotel in Beirut.

Executives from Lebanon's banking and financial institutions were invited by SOLIDERE in early November to be briefed about company plans,performance and  operations.

Fifty executives attended the series of four briefings at the Riviera Hotel on the master plan,restoration works,land development works in progress,property sales,and the company's financial performance.

A modern network for wet utilities in the BCD :

Environmentally-conscious utilization of water resources and a well-planned network for wet utilities in the BCD are major concerns of the company's blue-print for land development. Networks for water supply, sewerage, storm water and landscape irrigation,have been designed and constructed to meet the most demanding international specifications and standards.

The supply of potable water in the BCD will be guaranteed from two reservoirs in the Ashrafieh area,with an additional emergency source from reservoirs in the Bourj Abi Haidar area.The network will allow for a central fire-fighting system unique in Lebanon.

To maintain the BCD'S parks and streets well irrigated, a special irrigation system will rely on wells, reservoirs, a pumping station, a 10-Kilometer long main network and a 70-Kilometer secondary long network that will ensure adequate distribution throughout.

Much of the irrigation will be carried out automatically, with equipment that adjusts quantity and timing of distribution, minimizing maintenance breakdowns,and allowing for the city to maintain a rich green landscape.

The BCD constitutes the lower part of a large drainage basin which covers 540 hectares and extends to Ashrafieh in the east and Mousseitbe and Mazraa in the south and southwest. A storm water network independent of the sewerage system will be provided for the BCD,extending over 28 kilometers in its initial phase.

The stormwater system will contain five main collectors or trunks and two other minor sub-systems.Runoff from streets will be collected by gutter inlets.These will be placed along roads at sag points and at road intersections.Filters will rid the water from hydrocarbon pollutants before it reaches the sea.

The BCD sewage network has been designed for a BCD area of 180 hectares integrated into a surrounding drainage basin of 540 hectares.

Extending over 27 kilometers, the network will rely on plastic pipes requiring minimum maintenance,and reinforced with glass fibers to ensure durability.

Restoration works in the city center :

By the end of 1995, as the recuperation process neared completion, SOLIDERE had received 98 development briefs from recuperating parties, opening the way for restoration works to begin on a major scale.

Already,on-going restoration works are in process in the Foch-Allenby area, on Banking Street, Riad Al Solh Square, and Emir Bechir Street on the landmark Azarieh building.Restoration of all preserved buildings is scheduled for completion by the end of 1997.

By year end,SOLIDERE had also received more than 800 applications from former tenants interested in returning to the city center.

Over 100,000 people visited the SOLIDERE-organized exhibition "Beirut Archeological Days" where hundreds of finds from excavations on BCD sites were displayed. Held inside St.George's Maronite Cathedral and in the area between that church and the Greek Orthodox church of the same name, the exhibit provided Beirutis with their first organized glimpse into the archeological works.

Significant archeological finds underlining Beirut's Phoenician heritage have led to an active participation by SOLIDERE at the "Fourth Conference on Phoenician and Punic Studies" organized between October 2 and 6 in the Spanish city of Cadiz.

In her opening speech,the Spanish Minister of Culture underlined the importance of the Lebanese presence, saying that Spain and Lebanon were the two main pillars of Phoenician civilization. In 1999,the "Fifth Conference on Phoenician and Punic Studies" will be held in Lebanon.

Under the supervision of the Directorate General of Antiquities, SOLIDERE will be financing the project for restoration of the Roman Baths situated below the Serail esplanade.

These baths, the largest discovered to date in Lebanon, were constructed by the Romans during the first century AD and occupied an important role in the daily life of the city.

Their construction reflects an architecture characteristic of the Roman period in Asia and Africa. The baths are divided into three main rooms:

frigidarium, or the cold room; tepidarium,or the warm room; and the caldarium,or hot room.

These rooms were part of a complex which included a promenade area where socialites and intellectuals gathered to exchande views and ideas.

The project is divided into two parts:

1. The restoration and highlighting of the historical elements of the site;

2. The creation of a public park around the baths,an area for exhibitions and public events,a small amphitheater for cultural activities, and green areas for the exhibition of mosaics as well as special ramps and pathways for the physically handicapped.

A "garden of fragrances" will form part of the park, with trees and plants which emit perfumed scents as waterfalls come down from the western heights of the Baths.

Flow of delegations and dignitaries :

Delegations and dignitaries from Lebanon and abroad continue to come in large numbers to the BCD and SOLIDERE headquarters to tour the site and meet with company executives for updates on our works.

Among noteworthy visitors this quarter was Lebanon's First Lady Mona Hraoui, who was offered a tour of the archeological sites in the BCD after a visit to the maquette.

Other vistors included a French delegation from the Rouen Chamber of Commerce and another from TV5 - an international French-language television station, a Swiss travel group, and a Saudi Arabian financial delegation.

SOLIDERE was present at the Leipzig trade fair this quarter, where it exhibited a model of the project for the development and reconstruction of  the BCD. German officials and businessmen,and a large international audience showed interest in our stand and in the Project.

SOLIDERE was also present in the United Arab Emirates where it was one of 24 selected projects designated as "Best Practices in Improving the Living Environment." Over 700 participants attended this UNDP-organized Dubai meeting, a preparatory convention for the June 1996 Istanbul UN Conference on Habitat II.  SOLIDERE'S project was offered as an example of "Urban Planing and Reconstruction of a War-torn City Center."

World Press Photo in the BCD :

World Press Photo , a SOLIDERE-sponsored exhibition of the best international news photographs for 1994, was held in the city center from October 30 to November 9. The world's leading photographers displayed 206 photos of events that made headlines in 1994.

Held for the first time in Lebanon, the exhibition comprised a photo contest whose main theme was Beirut: Scenes from Life.

Invasion of the Dinosaurs :

Life of all sorts is returning to the city center. The Invasion of the Dinosaurs was an instant success among school children-and their parents-who floched to see the exhibition. Inaugurated on December 15, it will remain open to the public through February 25, 1996.

At year end, over 70,000 visitors had visited this lifesize dinosaurs robotics exposition.

Attending to the Normandy environment : 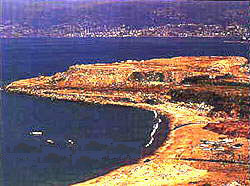 The environmental treatment of the Normandy area is an important aspect of  the project for the development and reconstruction of the Beirut Central District. Rubble from demolished buildings is being added to the waste dumped during the war years to help create valuable land on the sea front.

The reclaimed land will provide the BCD with valuable new areas for mixed use development, with an elegant sea front, a vast park and two tourist marinas. Also, and in accordance with the master plan, SOLIDERE will develop in this area residential, office and commercial space, in addition to entertainment and sport facilities.

Studies on the treatment of this area,which was transtormed into a major pollutant on the sea coast during the war years,have focused on three concerns:

- Treatment of gas emissions resulting from the dumping of organic waste;

- Analysis of the site material,to determine its organic component;

- A geological survey of the type of soil and rock formation in the area.

The actual treatment of the waste will take place in two phases:

- The first phase relates to the comprehensive treatment of the area  directly north of the Avenue des Francais. During this phase, which will extend over two years,waste material will be treated after being exposed to the surface.

- The second phase relates to the treatment of waste in the remaining areas of the reclaimed land.This will be carried out through complex processes that include the aeration and burning of gases through specially dug wells, and the treatment of non decomposable material.

Both first and second phases will start in 1996. Special insulating canals and ditches will contain the areas under treatment to prevent leakage and to control gas emissions.

SOLIDERE continues its reclamation works to the north-east of the Normandy area through the use of rubble from demolished buildings.

Back to The Quarterly